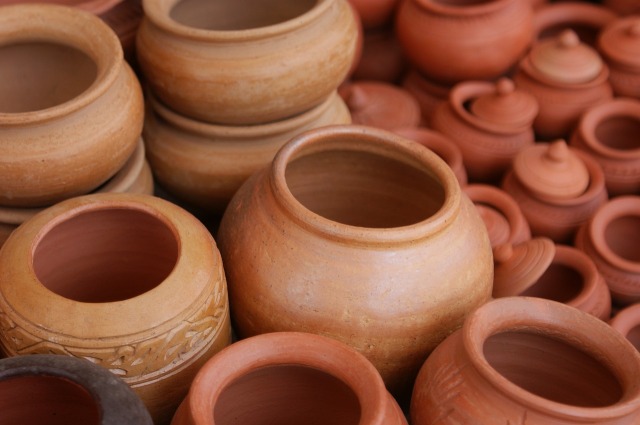 So, the thing about clay jars…

When I was 15, I developed an eating disorder. Not the glamorous skinny one; the unglamorous, bingey, vomiting one. And at first, I’ll be honest; I was pretty impressed with myself. One of the older, cooler girls at Drama club had shown me how to do it (so thoughtful!) and so off we would sneak, every Saturday in McDonalds, to have a private little puking party. Oh yes, we were awesome.

However, as teenaging became more awkward and my acne-prone skin became more ugly; I started to relish the buzz of abusive control that bulimia brings. As school-kid strangers called me ugly, I thought at the very least, I won’t be fat; and so disappeared into the toilet, every lunchtime, to take good care of that. But, the problem was, I didn’t want to be skinny either. See, there was a girl in the year below me who had been hospitalised with anorexia. And, although at the time I envied her self-control, everyone was talking about her. She was emaciated; she stood out; people constantly commented on her appearance. I certainly did not want that. And so I found myself in this hideous limbo; starving and vomiting until I lost about a stone and a half; and then bingeing it back on, before anyone else could notice. And so, what started out as a clicky, sicky little secret, very quickly became a lonely, ludicrous addiction. People who didn’t know were consistently, unwittingly insensitive; and people who did know, just couldn’t understand. I was the only one in the light; and, as I remember, it was a very dark place.

Now, somewhere within this dark place; Jesus happened. And at first, it was exactly the story you want it to be. I fell in love with Him. I died to myself; both the bits I hated and the bits I liked; and I learned the beautiful, exhilarating freedom of living in Him, in me. Finding Jesus for myself turned my world upside down and inside out. Coincidently, shortly afterwards, my skin cleared up too. (I even attracted some quite welcome attention; and, thankfully by this point, had the God-confidence to know how to handle it!) I went travelling; worked abroad. Things got good! For a while; I was truly alive in Christ.

You know I’ve never really given enough thought to what happened next. There was no event, no tragedy; nothing to put my finger on except to say that my fingers simply went back down my throat. The honeymoon period wore off; as it does with so many of us. I had truly accepted the Gospel, I promise you that; I’d have lived and died for Jesus and cried as I told the story. But. Little by little, bit by bit, I took bits of my dead self back. Both the bits I hated and the bits I liked; and I hated myself for doing it. I prayed to God to take it away; but when bad days came, I just did it anyway. When stresses came over relationships, college, weight, reputation… I took back the only control I knew. And honestly, even then, I really did think I was in control.

I still remember, however, the day I realised I was not.

I was in the Far East one summer from uni and teaching, occasionally, in a boys’ home round the corner. On my way home, one day, I popped into a bakery to buy them a cake. I hadn’t eaten for a while and temptation got the better of me, so I bought another.

An entire cake to myself.

I nipped home, threw up, then skipped off to the boys’ home with my lovely, generous gift as if nothing had happened. The boys were delighted with it… but I will never, ever forget the ensuing scene in my hideously selfish, first world memory. The older boys took it gratefully and speedily into the kitchen, took out a knife and began to dissect it; one counting the children and the other concentrating, hard, on sharing it out. They cut it into the smallest slices and yet…

The oldest boys cut a slice in half in order to share it between them; before the one with the knife offered his to me.

Obviously I said no and I left as quickly as I could; for in declining, and fighting back tears, I could still taste bile in my throat.

Looking back now, completely free and nine years “clean”, I recognise that I had a mental illness. And that part of the problem; part of the reason that I wasn’t able to live in the freedom that Christ had set me free for; was that I was expecting a quick fix. I thought that I should have been made perfect; instantly; and that if I wasn’t, God couldn’t use me until I was. But where, I ask now, in the Bible, do we find anyone perfect except Jesus?

See, I think we hear so many stories, so many testimonies, about transformed lives and instant healings, that often we leave no time or space for the deeper, more gradual work that needs to be done. I mean, yes, God does pull some people out of some awful situations, and those make for some pretty inspiring stories. But more often than not, God walks through situations alongside us; and ever so gradually, gently, corrects and heals.

So… No. In the end, my eating disorder wasn’t a stone in a bucket, or a post-it on a wall, or a ribbon on a cross. And it took another four years for me to be completely free. Though the beautiful part is- I couldn’t really pinpoint the day, when it happened, finally. For eating disorders -along with an awful lot of other deeply rooted sins- involve just that: roots. Layers of experiences, insecurities and issues that we need to open up to God and work through, with Him, piece by piece. They may take a day; they may take a lifetime; but more often than not, they take a journey.

For, you know, I still have issues with control,

They just manifest in different ways.

I’m still a jar of clay.

It’s just I used to focus on the cracks,

and put the onus on the jar;

Too broken; gone too far.

Now, however, I recognise,

That God’s treasure lies within;

That learning to live in the light, despite our brokenness,

Is where true freedom begins.

2 thoughts on “The Thing about Clay Jars”